You are here:Home  - Products  - PSA-CO Plant 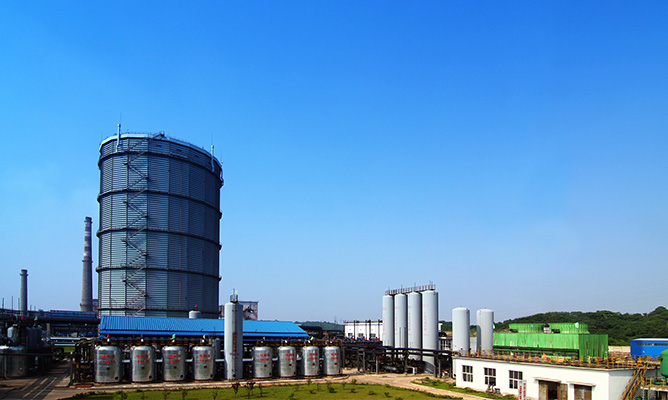 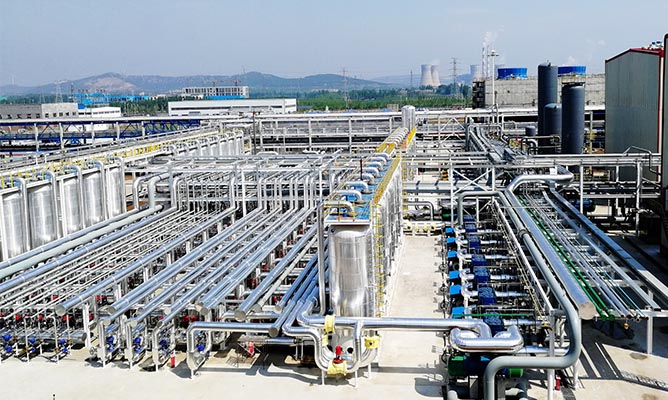 PKU PIONEER’s independently-developed and produced PSA-CO adsorbent PU-1 was granted the Chinese, USA and Canadian patents. PU-1 has ultra-high adsorption capacity and selectivity for CO, which are the key features for PSA-CO technology which reaches the advanced level in the world.

PKU PIONEER originates the high and low consumption PSA-CO technology based on PU-1 adsorbent, achieving the efficient separation of CO from nitrogen, methane and other components, which is of great importance for the carbonyl synthesis industry. This technology won the Second Prize for National Technology Invention.

PKU PIONEEER has designed and constructed dozens of PSA-CO plants for the clients, and becomes the highest shares holder in market with the features including low cost of gas product, high purity, high yield, flexibility of feed gas, moderate operating conditions and easy load regulation , which brings much economic earning and market competitiveness to the users.

PIONEER’s PSA-CO technology is suitable for any CO-rich feed gas.

The high purity of CO products (up to 99.99%) and high recovery (80%-95%) ensure high-quality and low-cost CO gas product for downstream synthesis.

PIONEER builds most of the PSA-CO plants in China, and holds over 90% of market shares.

In the process of steel production, a large number of blast furnace gas, converter gas, coke oven gas, rich in carbon monoxide, hydrogen and methane are valuable components, which are the main secondary energy sources of steel works. 55-60% of H2 is contained in coke oven gas, converter gas and blast furnace gas respectively containing 60% ~ 60% and ~25% CO, so steel exhaust completely can be used as a source of chemical synthesis of CO and H2 needed.

CO is a kind of important raw material with chemical synthesis which can be purified to 99% from the blast furnace for the production of ethylene glycol, acetic acid, dimethyl carbonate, polycarbonate, TDI, DMF and other chemical products, thus significantly enhancing the added value of the gas. To obtain CO by the use of blast furnace gas has a large cost advantage. With the rapid development in the non-steel industry, it has attracted attention by many domestic and overseas famous iron and steel enterprises.

2. To be premium fuel

The carbon monoxide purified up to 70% from blast furnace, whose heat value is up to 8200kj/nm3, can replace the coal and natural gas for metallurgy, such as the combustion section in iron making links.

3. To be reducing gas of blast furnace injection

The research shows that, to increase concentration of CO from the blast furnace gas and converter gas to above 45%, by  the use of separation technology, and then to inject into the blast furnace will significantly improve the carbon monoxide and hydrogen content of the furnace, and indirect reduction acceleration of the sinter in the furnace shell, which helps improve the production and heat efficiency.

This technology has been implemented in Hengyang Steel Group. The project extracted product CO (17,500Nm3/h, 70%) from BFG of 67,000Nm3/h. CO enriched will be used as an alternate to natural gas and weighs 30% of total gas consumption at full capacity. It created significant economic benefits to the enterprise, and the elimination of the BFG emission, and a significant reduction in carbon emissions.

Based on mature and leading PSA CO technology and the characteristics of converter gas, PKU PIONEER has developed the process of the formation of a unique CO separation technology of converter gas, which can be applied to get over 99% purity of CO product in large capacity from converter gas economically. The enriched CO gas can be used for producing high value-added chemical products.

CO is a kind of important raw material with chemical synthesis. It can purify CO from the converter gas to over 99%, which is used for the production of ethylene glycol, acetic acid, dimethyl carbonate, polycarbonate, TDI, DMF and other chemical products, thus significantly enhancing the added value of the gas. To obtain CO by the use of converter gas has a large cost advantage. With the rapid development in the non-steel industry, it has attracted attention by many domestic and overseas famous iron and steel enterprises.

The remained converter gas can be used for electricity generation except for converter fuel gas use. However, because its calorific value is low, the value added for electricity generation is low, and at the same time the carbon emission is high. The purified CO for chemical synthesis not only can decrease the investment of that from fossil raw material, but also can increase the added value and decrease the carbon emission. It is friendly environmental.

This technology has been applied to Shandong Aside Technology Company, and the flow of the converter gas is 45000 Nm3/h for 18000 Nm3/h CO product, of which the purity is 98.5%. This application is for 200000 t/a methane acid and 50000 t/a oxalic acid. Compared with the converter gas for electricity generation use, 318 thousand tons carbon emission can be saved per year.

Based on the advanced pressure swing adsorption and separation of carbon monoxide process, we successfully developed some of the more difficult industrial tail gas purification technologies, and have achieved industrial application and obtained good market feedback.

There are nearly 400 calciumcarbide manufacturing enterprises in China at present whose total annual productivity exceeds 15 million tons. More than 15 billion m3  tail gas of calcium carbide furnace is produced in China every year. It mainly contains CO (75%~90%) which is totally If fully discharged, equaling to the waste of 2.4 million tons of standard coal, and emits 12 million tons of CO2 and more than 900,000 tons of dust every year. It is the best way to save the energy, reduce the emission and transform the waste to treasure by reasonably utilizing CO.

Application of PSA-CO technology in the calcium carbide industry

Purification of CO by the PSA-CO technology may obtain the 99% high-purity CO and synthesize the high value-added chemical products, such as MEG, methyl carbonate, acetic acid, methanol, TDI and DMF.

More than 75% of the tail gas of calcium carbide furnace is CO. Purification of CO by the PSA technology and synthesis of the high value-added chemical product such as MEG largely reduce the raw material cost of the high-purity CO. The new-type purification device of PKU PIONEER not only utilizes the high value-added tail gas of calcium carbide furnace, but also gives a new idea for the development of the technology of synthesis gas-to-MEG.

Xinjiang Tianye Group adopts the unique PSA technology of PKU PIONEER to separate the high-purity CO from the tail gas of calcium carbide furnace to synthesize MEG. As the first industrial device synthesizing MEG by the tail gas of calcium carbide furnace in China, it completely solves the problem of tail gas reclamation. Besides, it not only promotes the emission reduction but also largely reduces the raw material cost of high-purity CO which saves a lot gas generation expenses.

The yellow phosphorus resource is abundant in China and deposit reaches 800-1000 thousand tons, which weighs 80% in the world. In  absence of the efficiency and advanced purification technique and utilization mode, the yellow phosphorus plant only burns little tail gas to dry the raw material or for the boiler combustion but most of the tail gas is discharged, thus greatly wasting the resource, intensifying the environmental pollution and obstructing the energy saving and emission reduction.

Besides, the resource utilization of C1 chemical products requires deep purification of the impurity in the raw gas, but impurities such as phosphorus, sulfur, arsenic, cyanogens and fluorine in the yellow phosphorus tail gas may result in the toxication of the chemical catalyst and corrosion of the material. Purification depth of the impurity determines the utilization value of the yellow phosphorus tail gas.

Application of PIONEER technology in the yellow phosphorus industry

JSW and PIONEER signed a contract on cooperation in the 15,000 VPSA ox...

The VPSA-O2 system is applied in China’s water treatment industry to s...